2. Locate your Eprom socket and note the notch orientation.

3. Pull up the Eprom

4. Insert the new eprom with the notch in the same direction as you noted in point 2.

This is firmware update 2.10 and is the latest official released operation system by Alesis. This operation system update / upgrade requires one eprom chip as revealed in the article`s photos and the chips will be labeled to help you locate the correct chip socket. For more info, please check below.

2.02 Bug Fixes:
1) Fixes the number of disk swaps for files < 1K.
Changes:
1) A MIDI Sequence Receive will not be initiated until the first non-F8H byte is
received. This change was made to accommodate the sequencers that always
send out MIDI CLOCK (F8H). Note that active sensing (FEH) and system reset
(FFH) are also still ignored at all times.
Added Features:
1) Alesis SR-16 product added
2) The disk is checked for disk change upon receiving new data and the following
message is displayed if a disk change occurred:
DISK WAS CHANGED MUST PRESS
RECV
This was added to prevent someone from entering the Receive page/ swapping
disks, and then receiving data (without pressing the Receive button again). The
DataDisk’s internal RAM would still contain the old disk directory. Two
possible undesirables could result: the current disk directory would get
updated with the previous disk’s directory info and the new data might possibly
be stored over good data.
3) A hidden feature which dumps the disk contents was added. To access this
feature, the user must press and hold the Send button and then the Backup
button. When the Do/Yes button is pressed while these two buttons are held,
the Data Disk will start sending the disk contents and the display will read:

2.03 Changes:
1) Slightly changes the disk format (gap 3 increased from 24 bytes to 64 bytes).
This decreases gap 4 by 200 bytes. Compatibility is maintained with previous
software releases.
2) Checks for zero bytes before storing file. If zero bytes, the file is not stored
(operation is aborted)

2.04 Changes:
1) Products with 3 byte sysex IDs whose second byte is non-zero and whose third
byte is less than 32H would display an incorrect manufacturer name although the
data would be ok). Although this has not been a problem since no products
currently have such IDs, it has now fixed.
2) Any disk formatted with version 2.04 will be recognized by the software as a
new version format (2), while all older disks will be recognized as the old version
format (1). The display for INFO page 3 has been changed to indicate the current
disk format version as shown below:
Disk Format 2,
Software v2.04
3) G.T. has been added as a manufacturer (ID 000047H), and Trio has been added
as a G.T. product (ID 00).

2.05 Changes:
1) While sending a file, if MIDI echo was on and the DataDisk was receiving
MIDI information, the file would not be sent correctly. This has now been fixed.
2) All individual’s names have been removed from the software.

2.06 Changes:
1) While sending a sequence file, the note history buffers were not updated
correctly when program change, controller, etc. data was mixed with the note data.
This resulted in extra note-offs sent unnecessarily when the send was aborted; this
extra MIDI data could cause a MIDI buffer overflow on instruments receiving this
data.

2.07:
1) When loading a disk with MIDI Program Receive channel saved, user would
have to enter the MIDI Program channel page before the DataDisk would
recognize the program change. This problem is fixed.
Alesis DataDisk Service Manual 1.00 20 09/01/95
2) When backing up a file to a backup disk that already had that file backed-up as
the last file on that disk, the newly created backup file would be displayed as a
multi-file, would not send, nor could be deleted. This problem is fixed. Work
around: Delete the file before doing the backup (only need to do if overwriting the
last file)
3) Added Alesis D4 and Quadra Verb GT product ids. The product id numbers are
6 and 7, respectively.
4) When a MIDI program change was sent following the insertion of a new disk
into the DataDisk (without first pressing any button that would cause the new disk
to be loaded), the DataDisk would respond according to the old disk’s info. This
problem has been fixed in the following manner:
Whenever the DataDisk receives a program change, it first checks the disk drive to
see whether or not the disk was changed. If the disk was changed, it first loads in
the information from this new disk. If the MIDI channels match and the program
number is within range, the appropriate file is sent.
If the MIDI channels do not match, however, the DataDisk will display the MIDI
receive channel page. If the channels match, but the program number is out-ofrange, the DataDisk will display the first info page. The display changes to these
pages only if the new disk has not already been loaded. Once a disk has been
loaded, a channel mismatch or out-of-range program number will be ignored and
will not affect the display.

2.09:
1) The backup problem is fixed. [Bad backup files – those made with 2.07 and 2.08
version software — would display the sysex error (Bad Data in File) message when
sent. Note that the bad backup files are not fixed by this new version of software.].

2.10:
1) Playback of some sequence files would sometimes glitch (timing would be off).
This would happen on fragmented sequence files, i.e. those which were stored on
non-consecutive sectors. The more distance between sectors, the more likely a
glitch would occur. This problem is fixed. Work around: Do a single file backup of
the file that has this problem. (This will unfragment the file). 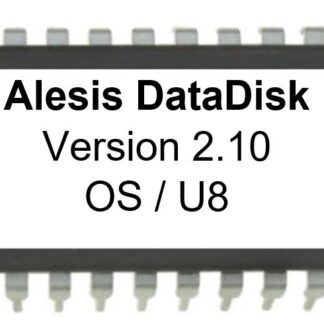