This is firmware update 3.87 and is the latest official released operation system by Kurzweil. This operation system update/upgrade requires two eprom chips as revealed in the eBay article`s photos and the chips will be labeled to help you locate the correct chip socket. For more info, please check below.

There are 2 different versions of the K2000/K2000R/K2VP/K2VX Engine Board and Operating System – Janis and Calvin. When you upgrade the OS, you must install the correct software. To find out what version you have now, watch the display when you power up the instrument. If there is a “J” after the version number in the display, you have a Janis unit, and need OS 3.87J Eproms. If there is no letter after the version number, you have a Calvin unit, and need OS 3.87 Eproms.

Setup Eproms: Note: If the K2000/K2000R is running Version 1.x OS software, and neither the Orchestral nor Contemporary sound ROMs have been installed, the Setup sockets will be empty. You must install Setup Eproms when upgrading to OS 3.87. Note: If the K2000/K2000R has one or both of the sound ROMs (Orchestral and/or Contemporary), it will already have the correct version of the Setup Eproms. If you don’t know which version of Setup Eproms the unit has, open up the unit and look. The OS and Setup Eproms are next to each other on the Engine Board. If you don’t know how to open up a K2000 or K2000R, email me and ask for help.

Please also checkout my other eBay articles. Maybe I have more articles that are interesting for you and please do not hesitate to contact me, if you have any questions 🙂 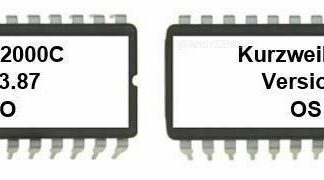